String blocks allow us to enter string-type data into our graphs. Strings are sequences of characters. They can contain letters, digits, spaces, symbols, and so on.

String blocks are very useful in constructing GLQ graphs, as, among other things, they allow us to: -Name our variables (and to later retrieve them by name)
-Input important data like contract and wallet addresses
-Create messages to be sent as emails or output by bots (Telegram, Discord, Twitter)
-Capture and parse messages sent by users, for example in a Telegram channel The following graph snippet is a simple example of a String block being used to input a CoinGecko token name into a Get CoinGecko Coin block in order to output that token's 24h volume into the logs: 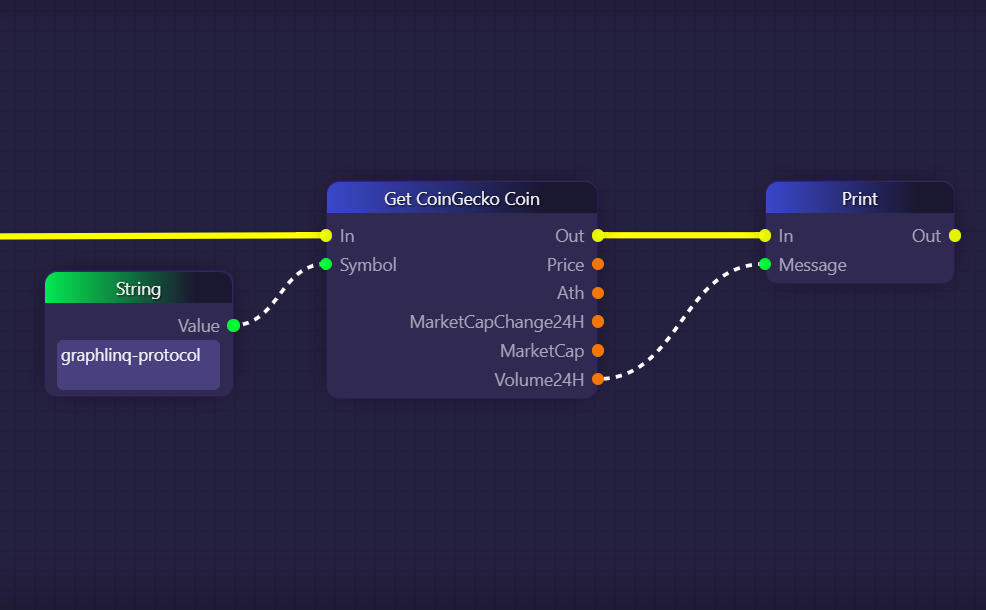 The next example is much more involved, and demonstrates several uses of String blocks in a single graph:

This graph listens to Telegram messages through a Telegram bot. Whenever a user sends the message "/maticprice" in a channel the bot is in, the bot will reply in that same channel with a message containing the price of Matic.

The first String block on the left is used to inform the graph of the Telegram bot's access token, so that the graph knows which Telegram bot to use. Whenever the On Telegram Message block detects that a message has been heard by the Telegram bot, it sends that message to the String Branch block to be compared to the string "/maticprice". If the strings match (== output on the String Branch block), then we execute a Get Uniswap Token Price block, using another String block to indicate Matic's contract address. Finally, we construct an output string by passing the string "The price of Matic is: ${0}" to a Replace String In String block, and telling it to replace the "{0}" with whatever price the Get Uniswap Token Price block retrieved. This message is then handed to a Send Telegram Message block, which will cause the Telegram bot to send that message in the Telegram channel. Note: The Variable Portal blocks at the top are used simply to pass references of the Telegram channel and bot that detected the command along to the Send Telegram Message block, so that the response is delivered by the same bot and in the same channel that the command was detected. In addition to what is shown above, strings can also be merged together using Concat String blocks, and strings can be searched to see if they contain other strings using String Contains blocks.
Previous
Long
Next
Get variable