The Boolean block allows us to to enter boolean values ("true" or "false") to be used as conditions to determine execution flow (which yellow line we'll be following next).

The simplest way to use a boolean value to control flow is with the help of a Boolean Branch block, which takes a boolean as input, and executes one of two output connections depending on the value of the boolean, as seen here: 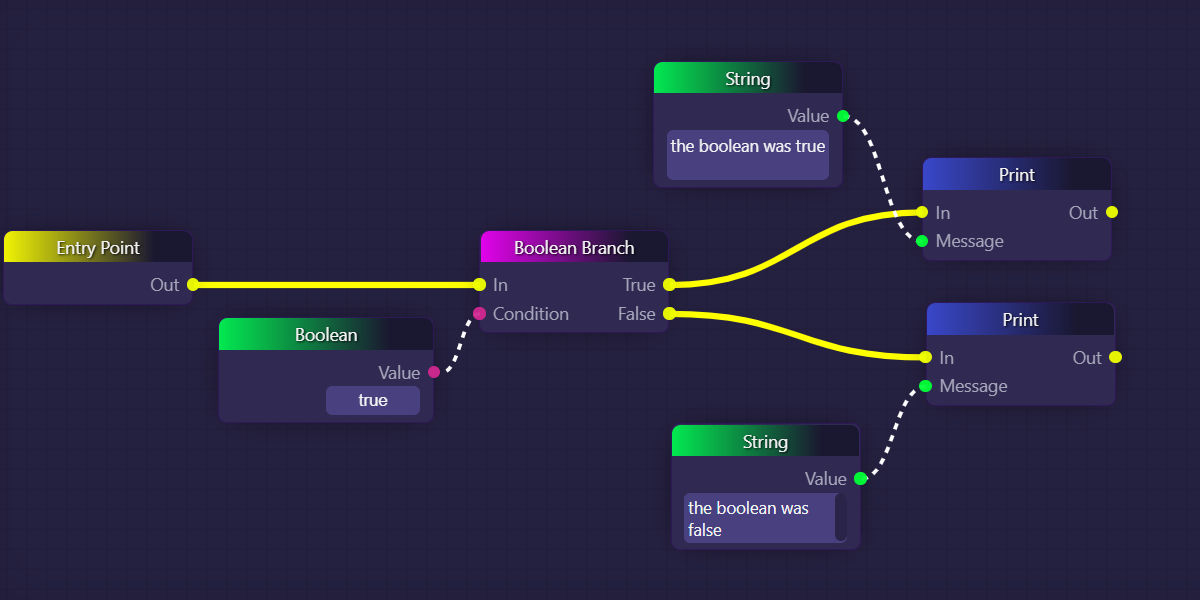 The example above, while very simple, is not very realistic, because no matter what, the top output of the Boolean Branch will fire every time we run this graph, since we hard-coded its condition to be simply the value "true". The Boolean and Boolean Branch blocks in the above example are therefore pointless.

The following graph snippet is an example of a more realistic use of Boolean and Boolean Branch blocks:

In this example, we are using a String Branch block to check if two given strings are equal. If they are equal, it triggers the top Set variable block, which uses a Boolean block to assign the value "true" to a variable called "theStringsMatch" (if a variable by that name doesn't exist yet, then this will also declare a variable by that name). If the two strings are not the same, it instead executes the bottom Set variable block, which assigns the value "false" to the same variable.

Later, in the right side of the image, we can see an example of that same boolean variable being accessed with a Get variable block, and the value of that variable is then used as the input to a Boolean Branch block, which will determine which of its outputs will be executed. This is an example of controlling the flow of our graph using a boolean variable whose value is not known to the developer when they make the graph, but is instead calculated only once the graph is running.

Note: the values for Boolean blocks are not case-sensitive, so they work with "true", "True", "false", and "False". If you were to type anything besides those values into the Boolean block above, then neither of the Boolean Branch outputs would execute.

Previous
Base Variable
Next
Variable Portal